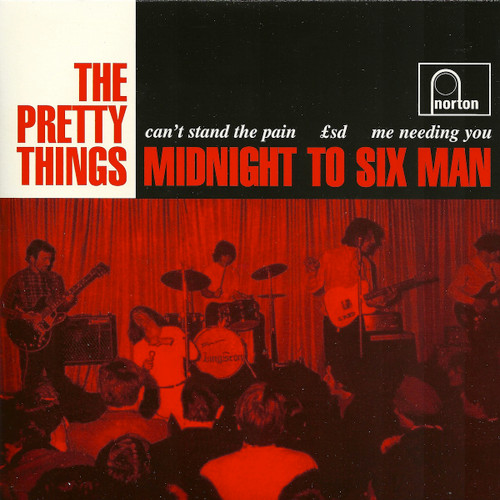 (EP-504) Dig the posh Norton seven inch EP series on the Pretty Things too! When the fabulous Pretties finally came and conquered the States on a massive cross country US tour, blowing the gourds of all who reveled in their majesty, Norton paved the way with five posh hard stock seven inch four-song extendo-plays of their most earliest wildest R&B stoked savagery circa 1964-66! Originally available only at the shows during the US tour, these boss seven inchers are available now at your favorite wax hut! If you're stuck in the boondocks, incarcerated or have your license suspended again, get all the Norton Pretty Things monsters direct from us for $4 each! Also pick up Norton 45-084: newly recorded Pretty Things single "All Light Up" b/w "Vivian Prince", the latter being a trib to the Pretties fab drummer Viv Prince. The single features the original 1966 lineup: guitar god Dick Taylor, howler supreme Phil May, insanely great wildman drummer Skip Alan, Mister Bassman Wally Waller, ivories-stomper John Povey along with fab guitar cat Frankie Holland who joined the Pretties many, many moons ago! A special very limited RED WAX US Tour 45 of their chartbound ALL LIGHT UP features the new alternate stomper PRETTY BEAT on the flipside. A very limited quantity of this collectors item is available directly from Norton!