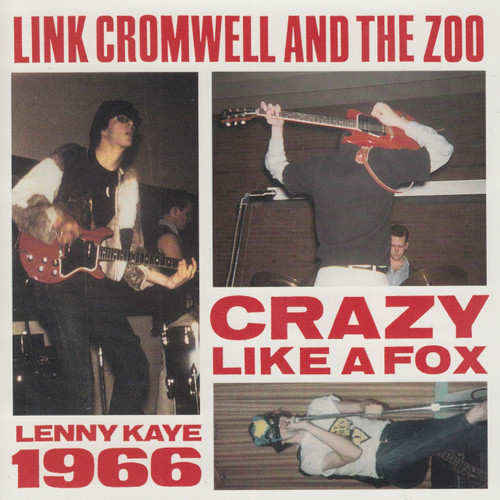 LINK CROMWELL & THE ZOO - CRAZY LIKE A FOX (CD) Lenny Kaye is a legend! From his early days as a rock writer/tastemaker to his landmark NUGGETS compilations of sixties garage band recordings to his current status as founding member/guitar god with the Patti Smith Group to his work as producer for the likes of Suzanne Vega and Soul Asylum, Lenny Kaye rolls on as the coolest rock n' roll cat on the planet! Now, Lenny has unearthed a treasure trove of 1966 live recordings of his own garage band, the Zoo, for which Lenny, a/k/a the energetic LINK CROMWELL, made noise and snarled as the quintessential sixties punk frontman! This set features his 1966 Hollywood label single Crazy Like A Fox / Shock Me plus a cool dozen never issued live tracks! The ultimate sixties garage band live set from the ultimate sixties garage band chronicler/ historian/ enthusiast/ perpetrator! (See also 45-092!)

"A great trip back into the local/regional world circa '66!" - Mohair Sweets