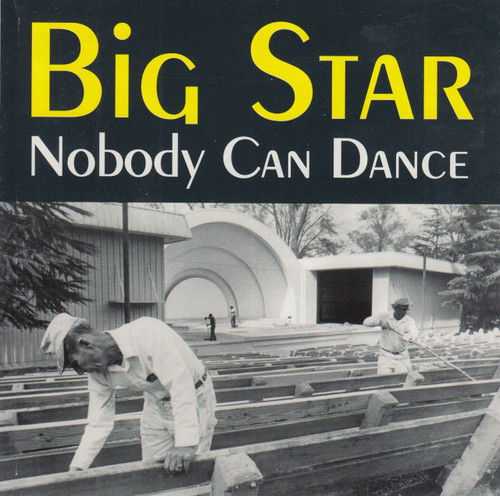 (Norton 265) NOT SHRINK WRAPPED. Norton Records is delighted to announce the release of NOBODY CAN DANCE, a monstrous collection of never before issued 1974 tracks from BIG STAR, the Memphis legends whose celebrated Ardent LP's NO. 1 RECORD (1972) and RADIO CITY (1973) permanently installed them deep in the hearts of rock n' rollers worldwide! This Norton CD presents stunning studio rehearsals together with pounding long lost tapes of the band-- Alex Chilton, John Lightman and Jody Stephens-- live n' wild one warm spring Sunday at the Overton Park Shell in their hometown! Despite the stage announcement that "NOBODY CAN DANCE", we insist that you all ignore that command and instead proceed with stompin'! The guys gave Norton the green light to present the fans with these lost gems, which show Big Star off in all their snarly splendor! This never before issued material includes Alex Chilton original stunners September Gurls and In The Street plus an insane rare live performance of THE LETTER-- all in brilliant high fidelity Nortophonic Loud Sound, of course! Norton said OH YES! BIG STAR said HECK YEAH! Now you all say YIPPEE and crank it up!

STUDIO REHEARSALS: Don't Lie To Me / Back Of A Car / O My Soul / Mod Lang / She's A Mover / September Gurls / In The Street / You Get What You Deserve

LIVE RECORDINGS: Baby Strange / Mod Lang / You Get What You Deserve / The Letter / September Gurls / Way Out West / O My Soul (CD only)