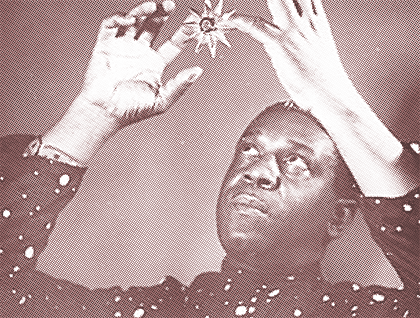 SUN RA (1914-1993) Sun Ra was a prolific jazz composer and bandleader, born Herman Poole Blount in Birmingham, Alabama. He was active in the South in his early years but made his mark in Chicago. He abandoned his name and old life for the decidedly cosmic “Sun Ra”, a person and personality totally apart from his old life as Herman Blount. A voracious reader and student of all things philosophical, his music and art took an interstellar turn for the unorthodox. Afrofuturism was a philosophy that celebrated the mysteries of the planet and the universe. His music and writings divulged his intergalactic eccentricity, but until now, with the never published “lost” poems collected in THIS PLANET IS DOOMED, we discover. Along with sidereal stanzas, a realm of attitudinal poemics that reveal his dissatisfaction with humankind. There is an undercurrent of anger in this collection that has electrified Sun Ra’s followers. A foreword by esteemed poet Amiri Baraka and an observational essay by popular culture historian Bhob Stewart make this a thought provoking hip pocket paperback that will be drawn upon time and time again.

Find out more on SUN RA at KICKSBOOKS.COM!