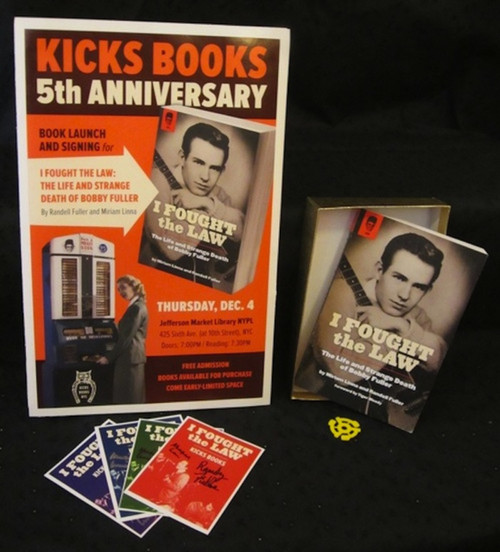 (KBM1) I FOUGHT THE LAW: THE LIFE AND STRANGE DEATH OF BOBBY FULLER by Randell Fuller and Miriam Linna  VERY LIMITED. Book, plus bookplate signed by authors and poster of book launch (11 x 17 bifold). Biography of West Texas legend Bobby Fuller, "Rock And Roll King Of The Southwest", is told through the eyes of his brother/bandmate Randell-- Randy Fuller.  Fuller's teenage home garage recordings are pure, wild and heart stopping anthems that pushed him into the Hollywood big leagues where he was no longer in control of his music and career. The title song, plus Let Her Dance, Another Sad And Lonely Night, Shakedown and so many others are all world-class rock and roll favorites. Bobby Fuller wrote the songs, recorded them in a garage studio that he built with Randy, released them on his own record labels, promoted and supported them himself, and opened his own teenage night club in El Paso. He was the king of the scene, and soon found himself bound for the coast where he wanted to bring his vision to a larger audience. This book tells the story of his early years, through the Texas teen days, and into the last eighteen months of his life when his career skyrocketed into the music charts, television and the movies, and he became an unwilling pawn to power brokers with little regard for his talent. He was found dead in a car, doused in gasoline, in July of 1966.