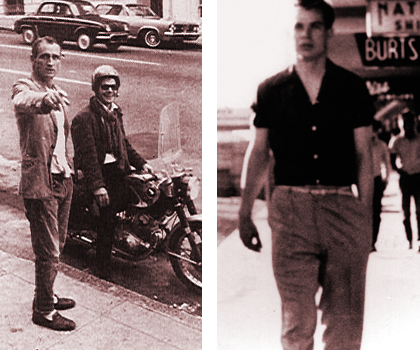 CHARLES PLYMELL was born in a converted chicken coop on the high plains of Finney County, Kansas in 1935, during one of the blackest dust storms of that period. His father was a cowboy born in the Oklahoma Territory; his mother of Plains Indian descent. He dropped out of high school after 9th grade and drifted through most all of the western states, picking up odd jobs along the way. Heavily steeped in jazz, race music, and country, he ran the “Benzedrine Highway” between Los Angeles and Kansas City during the so-called hipster years that spawned the beat generation.

In 1963, he located to San Francisco, where he roomed with Allen Ginsburg and Neal Cassady, writing, making films, and creating collages. He had a profound impact on underground comix when he published Zap Comix in 1969, his own printing press. Although he is linked to comic artists R. Crumb and S. Clay Wilson, and to beat poets including Allen Ginsburg, William Burroughs, Herbert Huncke, Neal Cassady, his own work is unaffected by that of his peers. Experiencing Plymell means taking a wild ride through his personal landscape, dredged in rhythm n’ blues, hillbilly holler, and the lonesome wail of the real America.

Author, artist, poet, publisher, and ultimate motorhead, Plymell has forged a path without giving up an iota of his attitude, creed, or spirit. He simply defies gravity.

Plymell opposes the National Endowment for the Arts—he sees it as a politicized, unjust system feeding on its own mediocrity and self-contradiction. He has never received any funding from any federal, state, or academic agency to pursue his creativity-- this, despite the fact that he has engineered a poetic attitude that has never been duplicated.

Find out more on CHARLES PLYMELL at KICKSBOOKS.COM!