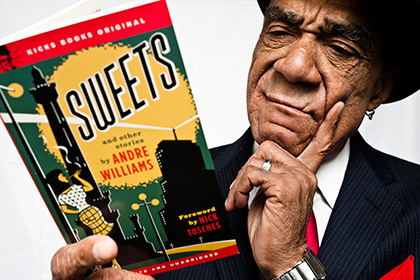 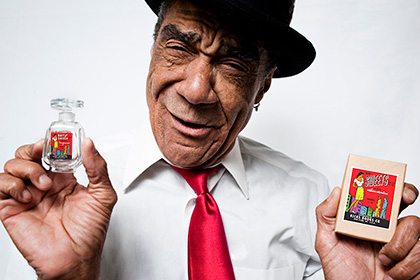 ANDRE WILLIAMS was born in Bessemer, Alabama in 1936, migrating with his family to Chicago when he was a child. After the death of his mother in 1943, he was sent South to the care of his grandparents. The North-South transition was unbearable for young Andre, who was to return to live in the Windy City with his father, a steel mill worker.

With little parental supervision, Andre traded into a penny ante career as a juvenile delinquent, barely escaping Illinois State Reformatory by using his older brother’s ID card to enlist in the US Navy. His career in the Armed Forces came to a halt when it was discovered that he was underage.

As a civilian once again, he chose to avoid the pitfalls of Chicago and relocated to Detroit, Michigan, where his musical legend began, on joining the Five Dollars, and with writing and recording for the legendary Fortune Records label. Bacon Fat, Greasy Chicken, and the extraordinary Jail Bait would be the tip of the iceberg of Andre’s musical contributions. From his start at Fortune in the 1950’s, he went on to work at Motown with Stevie Wonder, Mary Wells and the Contours. He produced (and co-wrote) the Five Du-Tones’ 1963 hit “Shake A Tail Feather” ( #28 on BILLBOARD R&B charts) and wrote Alvin Cash’s 1965 R&B chart topper “Twine Time”. In the late sixties, he produced solo hits including the standout “Cadillac Jack” for Chess Records. He has composed several hundred recordings and continues to be one of the most widely collected and respected of original soul and rhythm & blues artists.

Hard drugs eventually took a toll on Andre, leaving him homeless and destitute. In 1995, his career was revived by George Paulus, who produced the acclaimed comeback album GREASY for Norton Records. Andre continued to record for Norton, as well as for In The Red, Bloodshot and Pravda, while touring internationally to great acclaim. The 2007 film AGILE, MOBILE, HOSTILE documented a year in Andre’s life. With the return to constant touring and performing came a return to old vices. He was in and out of short-term rehabilitation, but always, there was the return to hard habits. Hitting the age of seventy without a permanent address and with his health rapidly deteriorating, Andre checked into a six week program at a Chicago substance abuse facility.

At a friend’s urging, he began trying to write fictional stories, in an attempt to keep his mind and hands busy. Writing became his self-imposed rehabilitation, and his hand scribbled no holds-barred tales evolved into a short set of various-length entries which he immediately began referring to as “The Book”. This debut volume from 73 year old Andre Williams is Sweets (And Other Stories). The title story is a narrative novelette which takes you for a wild ride from Chicago to Houston, New Orleans, and New York City, as a teenage girl finds herself in a family way, without a family. Forced to fend for herself, she is taken under the wing of a local pimp who entices her into prostitution. The adventures that follow are a free for all foray through the fantastic world of pimps and their women, funeral directors, gangs and drug running, with sidebar anecdotes that are guaranteed to appall, alarm and astonish.

Extreme entries remain unedited, and none of Williams’ raw drawl storytelling style has been tampered with in this standout fiction debut. Sweets is the first hip-pocket paperback from New York publisher Kicks Books.

Find out more on ANDRE WILLIAMS at KICKSBOOKS.COM!